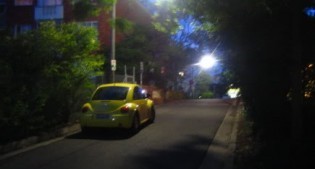 “Clean-up on isle three”, the young store clerk announced over the intercom. “another hyperactive kid” Nicole thought to herself as she bent down for the paper towel, revealing the firm shapely legs that seemed to continue forever under the tight red cotton plaid skirt she had decided to wear to work that day. Nicole visit that night to her neighborhood supermarket was not unusual as she made that trip once a week to restock her household supplies.

She reached up to the top shelf to grab a pack of those elusive butter pecan cookies that melted on her tongue giving her that unforgettable feeling of accomplishment. mid reach, she paused to stare at the object that had given her so much joy for the past 3 years. given to her by her husband on their wedding day, her wedding ring, a simple platinum diamond studded heirloom had made her happy beyond measure, as unlike most couples, she had found the man of her dreams. the rest of the checkout seemed to pass in a flash as she was still reminiscing on the lovely days and the warm erotic nights with her perfect guy. Just the mere thought of her husband inside her caused her supple nipples to protrude through her tight wool sweater.

She dropped her groceries into the trunk and proceeded to get into the car. One turn of the ignition and she was out of the parking lot and unto the quiet neighborhood street. For some reason she had the feeling that someone was watching her, a cold chill passed through her body as she looked up into her rear view mirror to see if her car was the only one on the road. Her view was blocked by a masked figure in the backseat, the sudden appearance of this ‘man’ caused her to swerve wildly into the wrong lane. As he reached around her neck and grabbed firmly he muttered to her to keep driving.

Heart racing, fingertips now numb and a foreign hand now around her neck she tried to oblige and continued driving on the right side of the road. “Where are you taking me” Nicole demanded in a child’s voice. Silence met her as she continued to drive fearful of stopping or signaling some passing vehicle. “Turn here” the gruff voice said a few miles down the road. As Nicole turned the car she realized she was going to the old Kendal farm. No one lived their as the owners had gone bankrupt from the drought the previous year. Heart now racing faster she began to fear what he was going to do with her. “stop right here and give me the keys” the now deadly voice whispered to her. she pulled the now infinitely heavy key from the ignition and handed it over to her captor.

Pulling her out of the car he looked up and down the young wife’s body. grabbing at her button-down sweater he began pulling at it watching as each button gave way to reveal a lace red bra. the trembling of her body from the ordeal she was experiencing sent the captor over the edge as he put his hand on her leg and began to slide it up further and further to her warm center.

Nicole now on the verge of a nervous breakdown, watched helplessly as he ripped her Victoria secret underwear from her body. His now tumescent member was rubbing against her leg and his hand was massaging her clean shaved pussy. What was this feeling she was having. The familiarity in his touch was causing her to become wet in anticipation of what he was about to give her. Slowly her fright was giving way to absolute thrill as she watched him unbutton his pants.

Quickly he pulled her skirt above her waist to look at what was awaiting him…a throbbing wet pussy looking like the a bar of dark chocolate… moist and tempting. He grabbed her legs and pulled them up and around his waist “don’t fight it” he whispered in her ear. At this point Nicole was far from fighting, helping his dick to find her pussy as she was ready to take all that he had. He entered her temple and he could hear a gasp of pleasure as she held him closer to his body. With each stroke Nicole held on tighter to this strangers body moving her hips to take in more of what he was giving her.

He turned her around and bent her over the trunk of the car and entered her from behind. the moist, wet pussy greeted him with open arms as he started his rhythm looking at the expression of joy on her face as she pressed her cheek against the car trunk. Nicole felt something building up inside her, she was ready to give her last scream. she pulled the strangers hips closer to hers and she bucked and riled, feeling absolutely content with her mind blowing orgasm. Reaching his peak the stranger gave her one last thrust as he exploded inside her, collapsing on her back in total exhaustion.

She turned around to greet her assailant face to face. she reached for the mask and pulled it off, she smiled and kissed him passionately on the lips and embraced him longingly. She said in a tone of finality “Nice one honey, next time ill be the one in the backseat”

Gone are the days when trading sex for money was a sordid affair. When women had pimps who served as both bodyguards and accountants. Gone are the days when the art of prostitution was simple in concept where you knew where you stood in the scheme of things and you could name your price upfront. Now it seems there is another shade to that gray area, a brighter more appealing ‘legally’ and socially accepted route. It’s a fine tuned blend of the taboo mixed with the traditional creating the ultimate hybrid. I wish i could give this new arm of…

Next ArticleMy Personality in Perspective