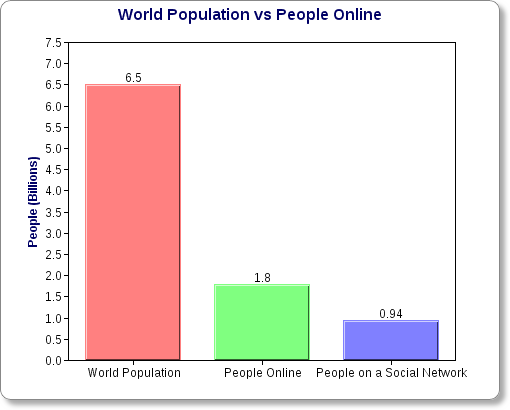 Reaching the One Billion Mark

It seems that the Social Network Wars are now over with Facebook emerging the victor. With no end in site Facebook with over 400 Million Users is on the top of its game. MySpace the once giant in the social network era was crippled when david-like Facebook approached. Indeed taking on a goliath feat was no easy task, but, with its streamlined business model and innovative network practices, many other social networks have to cower in fear. That is not to say that niche driven networks have not taken off in their own right. Social Networks such as Youtube and Twitter have a strong foothold in a otherwise saturated market.

There will be a point where user stats will reach a plateau and begin to level off where the rate of new users and users who absconded will be more or less equal. But at what point will that be? how many users will will a social network have to absorb before they become totally saturated; barring no other influence such as internal combustion (myspace).

At 400 Million users Facebook is still growing leaps and bounds poking their head into markets where social networks have never ventured before, winning the hearts and minds of first time social networkers and email checkers. Twitter at 75 Million users, is growing at a pace rival to that of the 2006 worldwide housing bubble and will indeed pass the 100 Million mark in the very near future.But what is the upper echelon mark to beat. What mark will dwarf any set before it. I put that mark at 1 Billion worldwide users. One Billion you say? You might think thats a staggering number but lets look at the stats.

According to the stats approximately one third of the worlds population is currently plugged in, thats about 2 billion people (give or take a few million).  A further breakdown shows half that number is currently in one or more social networks. Now imagine if the number of online users double within the next 5 years, where do you think that number will be. Doesnt seem like one billion is that far off huh? As internet speed increase as well as accessibility, users will become more drawn to each other to create more digital social connections.

Graph of current user stats for the top 5 social networks worldwide, We see that One Billion is not that far off. European research and consulting firm InSites Consulting has released a detailed report based on a global study of 2,800 internet users. The full report provides fascinating insights into social networking preferences and behaviors around the world see below:

Social networks around the world 2010
View more presentations from stevenvanbelleghem.